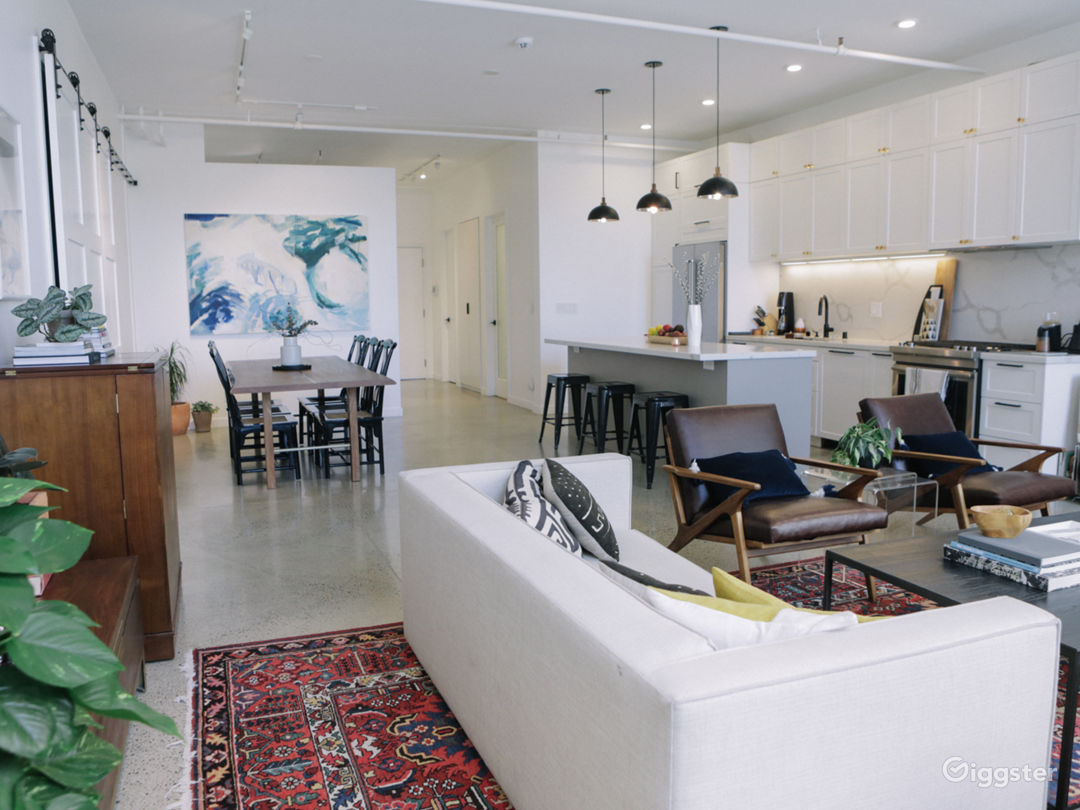 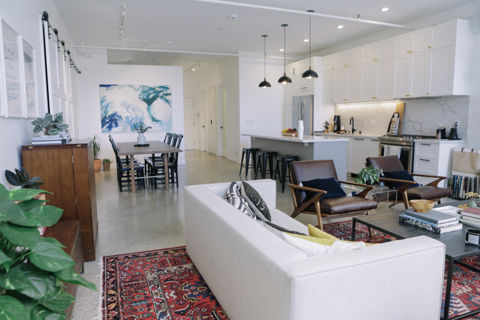 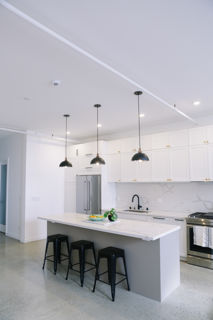 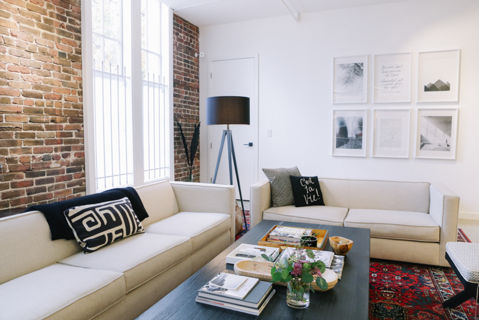 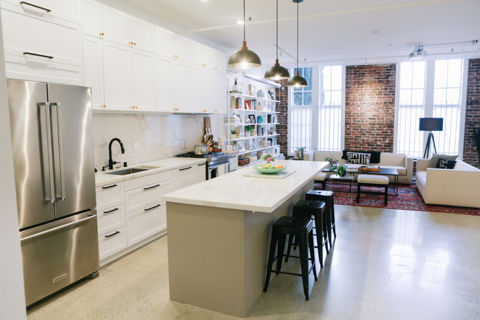 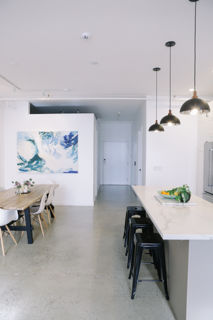 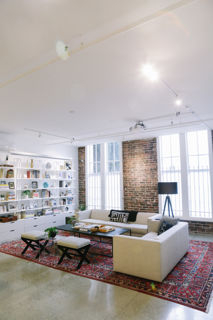 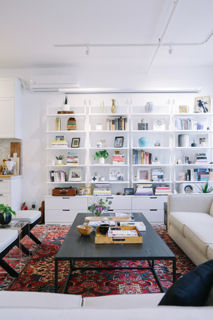 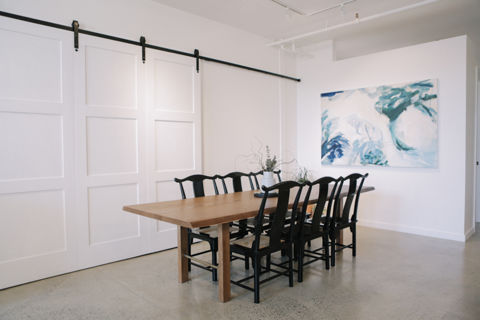 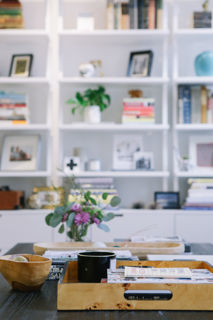 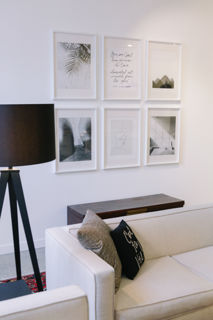 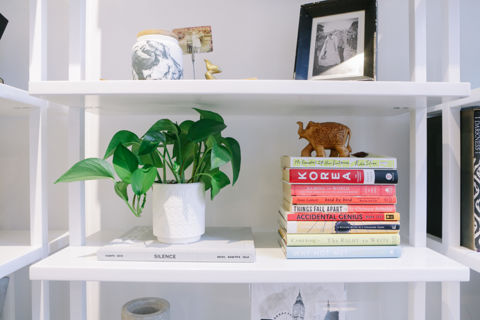 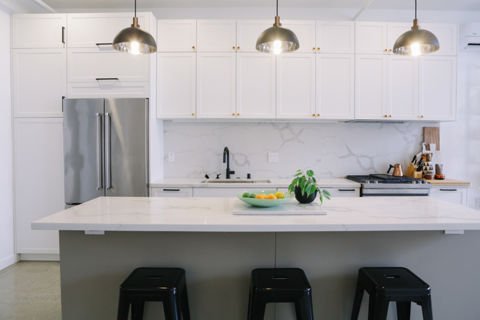 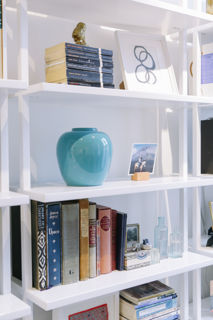 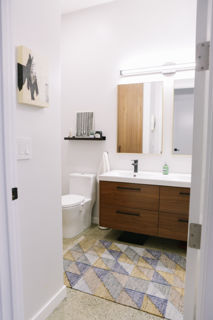 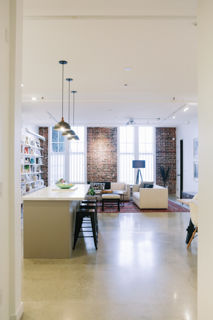 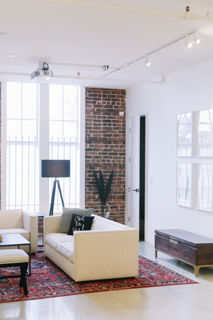 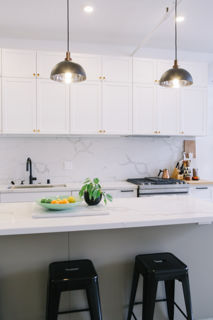 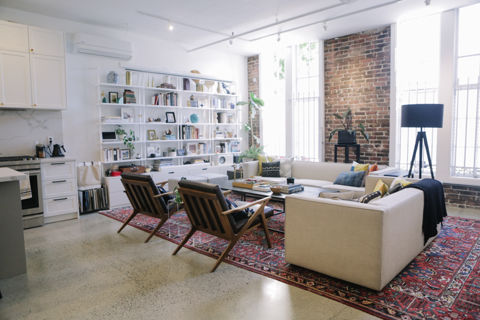 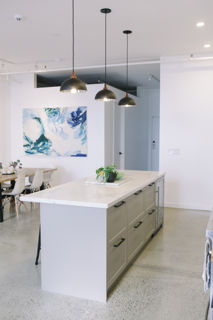 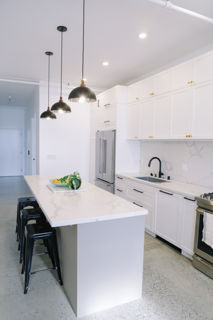 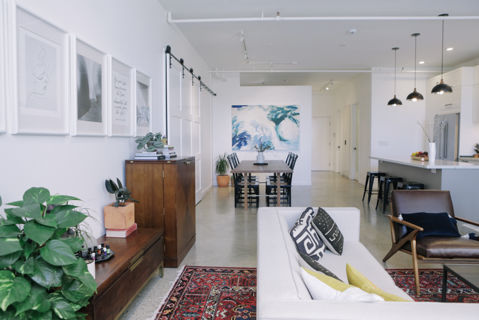 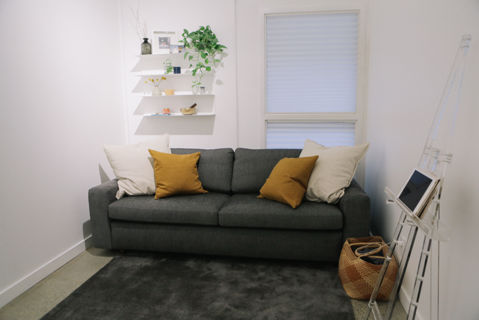 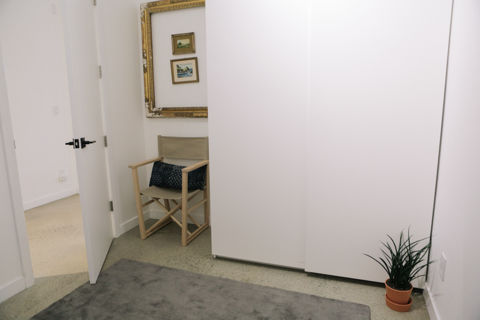 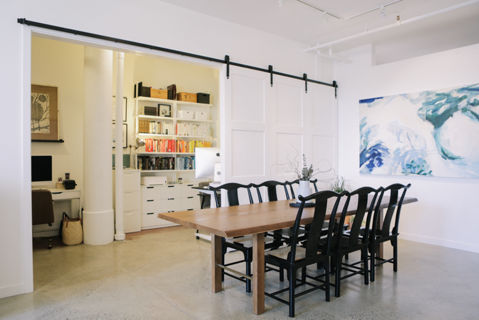 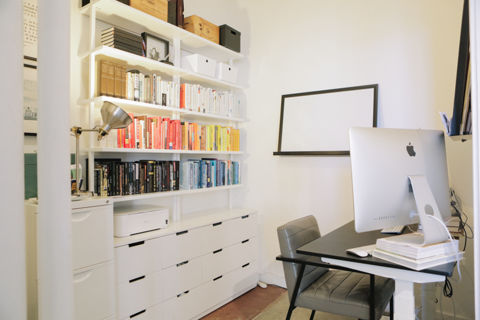 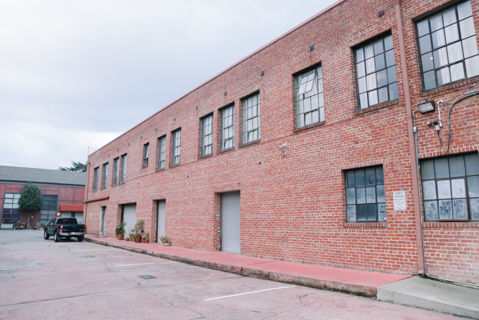 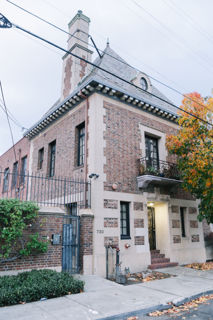 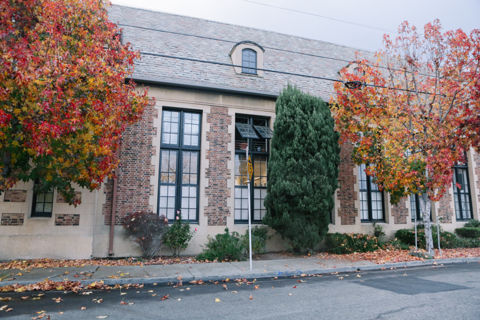 Eclectic Loft, Bright Natural Light, 10ft Ceiling
You have reached your weekly limit of 5 album downloads
We'd be happy to increase your limit, just contact our support team so we can get to know you a little more.
Request Higher Limit

4
Oakland, CA
Favorite
Share
**NOTE: Rates are variable and based on impact (i.e. motion vs. stills, hours on property, cast/crew size, content, and amount of areas used). The rate proposed on this listing is based upon minimal impact and crew size for a NON-commercial stills shoot.** The price for the space is for up to 2 people. Additional people are $10/person per hour. So 5 people would be $127/hour. 10 people would be $177. 20 people would be $277/hour. 1100 sq ft space 10 ft ceilings with large windows All white walls and a polished concrete floor Photo ready minimalist kitchen Movable furniture for staging All props in the space are available to use Projector and large screen Wifi Dining table seating for 6 people (with the current white chairs in the photos) *We have 4 extra folding chairs if needed to seat up to 10 people at the table. *Extra dining table and chairs available for additional fee (for dinner parties up to 20 people) - $375 1 gated parking spot. All others, FREE regular street parking in a residential neighborhood with no time restrictions other than street cleaning on Thursday and Friday afternoons between 12:30pm and 3:30pm. Available for an additional fee: *Extra dining table and chairs (for dinner parties up to 20 people) - $375 White seamless paper backdrop - $175 Clothing rack and two small steamers - $175 About the lofts: Originally an industrial laundry facility built in the late 1920s, it was once named one of the most beautiful industrial buildings in America. At the entrance of the building you can see some images of the original exterior and interior of the building in use. It was later converted into live/work units in the late 1980s. IMPORTANT RULES: 1. Keep the front door to our unit closed at all times except for coming and going. 2. All people and equipment must remain inside of our unit. (ABSOLUTELY NO using the common space outside of our unit). 3. When coming and going, please keep noise to a minimum. We maintain the right to be on location for the entirety or portion of the rental, to ensure the success of the rental and also for maintaining the rules and regulations of the building. Availability 7:00am-11:00pm 7 days a week. All booking start and end times are inclusive of set up and tear down time. Food & Beverage/Catering Food and beverages and/or catering are welcome. If you are not using a catering service, but are bringing food we require a Specialty Event Insurance Liability waiver with Host listed as an additional Insured. You can find this online or through your current insurance renters/homeowners policy. Kitchen Use All dishes and cooking supplies are available for guests use, including plates, glasses and silverware. NO ALCOHOL can be consumed onsite unless cleared prior to the rental. Garbage, Recycling & Composting The is NO garbage disposal. Put all food waste into the green bin that is just to the right of the sink (Push down on the stainless steel lid and it will pop open). We have bins for all three types of waste and ask that you organize accordingly. Decorations & Displays PRIOR to any moving of furniture or items, please take photos so you can return the unit back to the original condition.

Melissa R.
21 days ago
Pros: The space had a great layout and a lot of areas to use for my professional photo shoot. There were a lot of options in the place, and my photographer got some great shots given the space. Additionally, the owner was quick to respond leading up to the scheduled date I booked and was extremely friendly. After contacting her several times the day of the event (read next part), she offered to extend my time to make up for the lost time from trying to find someone. I thought it was sweet of her, but I booked the photographer for a designated time where it didn't make a difference for me and my budget, though thank you for offering! I know she was out of the country at the time and tried her best to accommodate given the circumstances. Cons: First, it was stressful trying to find parking in the area, especially since the street was closed on the day I booked the site for construction work. I had to circle for 20-30 minutes until someone finally moved their car, and I was told parking "is easy." Secondly, the owner provided a number for someone on-site; however, the number was incorrect and I had a hard time trying to get a hold of someone the morning of the booking. For the first 20-minutes of my booked time, I could not get into the building. Luckily, a mailman let me into the gated driveway, but I had no access to finding the designated person since the buildings were not numbered once inside the gate. Glad I eventually bumped into the designated person on-site, but I had to ask every person going into the building which was stressful. Thirdly, I was hoping to utilize the computer area shown in the images for this booking, and when I opened the room door to it, it was cluttered with several items and unusable. My photographer and I were disappointed since we wanted to use that space but did not think it was worth cleaning up given the time that had already been interfered. Lastly, the bathroom had used tampons in the garbage and used towels where it looked like the place had not been cleaned in the rooms off the main room. Clearly, someone stayed there, and I would have thought it would have been cleaned before renting out the space. This was my first time using Giggster, and not sure if that is typical. Overall, the space did the job that I needed it to do, the owner was friendly and meant well given the circumstance that morning, but it was extremely difficult to park and find the locations since specifics were not provided once arrived on site.
Always communicate through Giggster
To protect your payment, never exchange money or communicate outside of the Giggster website. Learn More. 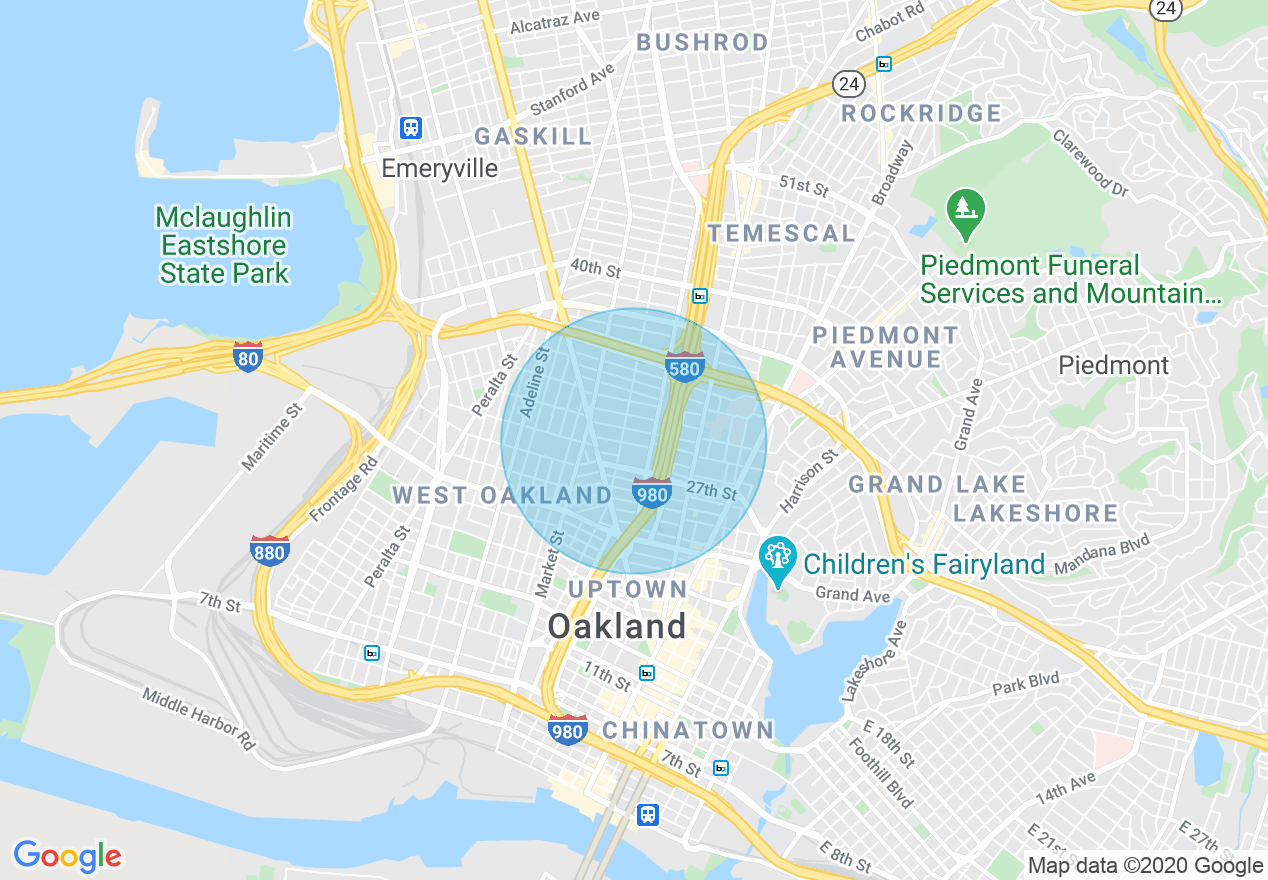 $97/hr 4 hr. minimum
Total hours: 0
Cast & Crew:
1 - 5 people $97
6 - 15 people $97
16 - 30 people $297
31 - 45 people ask host
46 - 60 people ask host
60+ people ask host
Cancel for free within 24 hours
All bookings adhere to Giggster's Grace Period policy which allows a full refund for bookings cancelled within 24 hours of confirmation with the exception of bookings that are confirmed within 48 hours of the start time.
Learn more
This helps us cover transaction fees and provide support for your booking.
Security deposit will be held 48 hours prior to your booking’s start date. If we are unable to authorize a hold, your booking may be subject to the terms of our cancellation policy.
Giggster takes %!f(<nil>)% commission from your location fee only. We do not take commission on any additional fees.
Sarah H.
Founder
Response rating:
Excellent
Response time:
A few hours