So you’re wondering about light meters for your photography? In this post I’ll try to distill down the essentials to get you up and running with using a light meter. I’ll finish up by answering a few common quesions.

I’ll use the Sekonic L-308S-U light meter as an example, but the principles will apply to just about any handheld light meter. If you want to get a light meter though and not sure what to buy, that Sekonik model would be a great choice because it’s cheap, but has all the features you’ll likely need.

So let’s get started, shall we?

By default most meters are set to show values at either 1/5 stop or full stop increments, but most cameras and flashes use 1/3 stop increments instead. For accurate values, it’s therefore pretty important that you set your light meter to use 1/3 stop increments. With the Sekonic L-308S-U, hold the power button at the same time as the mode button, the display will then show the current increment selection. Press the mode button to set it to 0.3. Now just hold the power button to power off the meter and save the new setting.

The basic idea of a light meter is to measure the amount of light falling on a scene and tell you what camera settings you should use to achieve proper exposure for that scene. You do that by inputting two out of the 3 values from the exposure triangle and the meter will tell you the correct value for the 3rd one.

For example, if you know you want to shoot at ISO 100 and at a shutter speed of 1/160s, you’ll input those in the meter and then take a meter reading to get the aperture you should be shooting at for proper exposure.

The light meter has a white dome called a lumisphere which reads 180 degrees of light in the scene and averages it to arrive at a mid-gray. This is called incident metering, meaning the reading is made by actually receiving the direct light that’ll be used to expose your photograph. That’s different than reflective metering, which reads that light that’s reflected back and is the type of metering that cameras do.

Most light meters also have the ability to take a reflective reading, but for the rest of this post we’ll focus on incident metering, which the way light meters for photography are used most of the time anyway. Using reflective metering can be useful if, for example, your subject is too far and it’s not really possible to go get a meter right where your subject is at. On the Sekonic L-308S-U meter, you can push the lumisphere to the side to use the reflective metering. 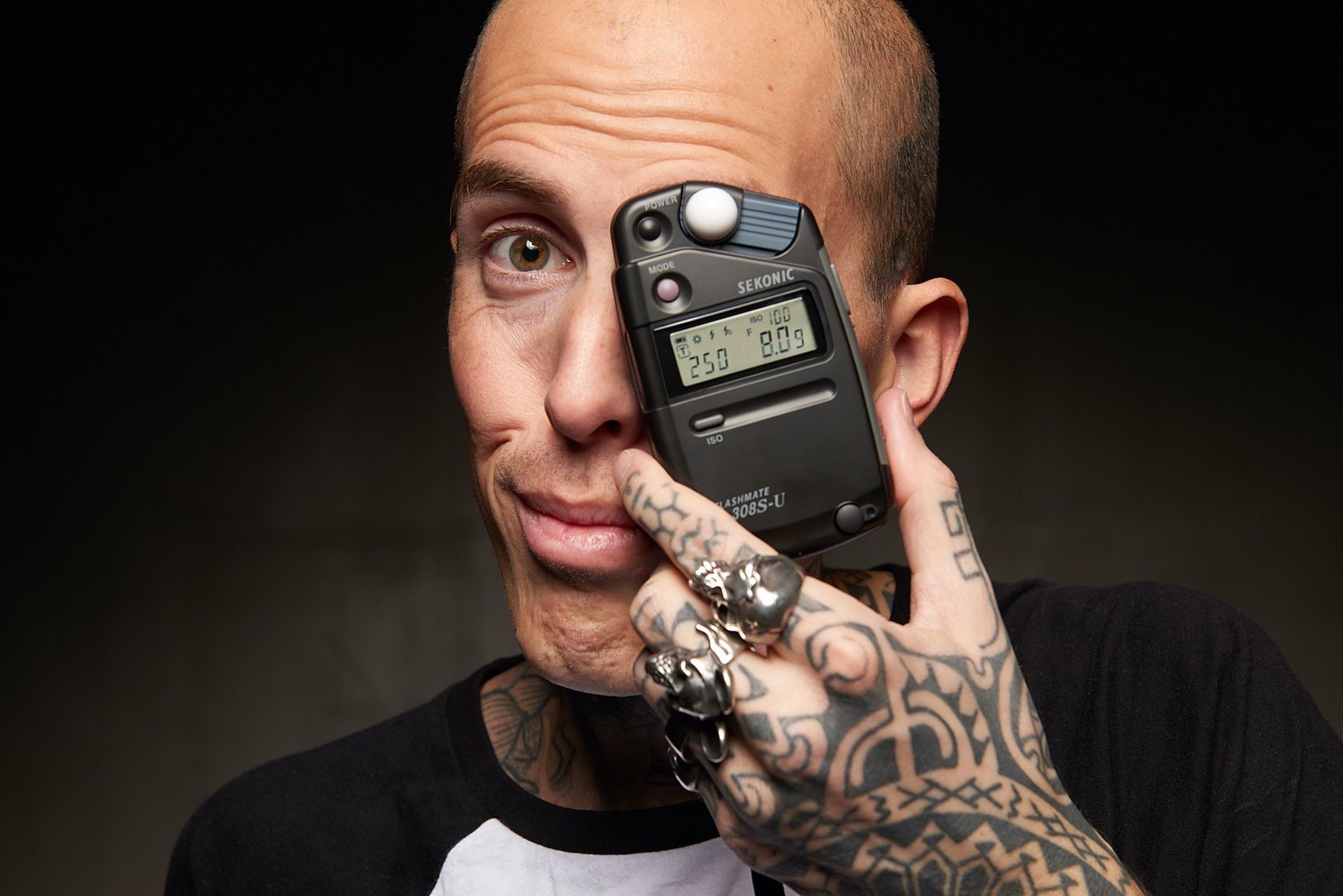 So maybe it’s all starting to make sense for you, but you may be wondering about how it works with natural light vs constant light vs flash. That’s where metering modes come in!

For any type of constant light, which includes natural light, you’ll use the meter in Ambient mode. Often that mode is represented by a little Sun icon ️️️☀️. In ambient mode, once you’ve set your ISO and either your desired shutter speed or desired aperture, you can then take a reading or even hold the reading button and move around to see if the light meters differently at different areas of your scene.

Some meters, the Sekonic L-308S-U included, will only allow to use the ambient mode in shutter priority mode. In other words, you can only set the shutter speed and the ISO. Most of the time though shutter priority mode is what you’ll be after anyway, so it shouldn’t be a problem.

This mode is probably what you’ll end up using most often if you’re shooting with flash. Some light meters have an integrated radio that can trigger the flash remotely. Sekonic L-308S-U is a more bare bones meter, so it doesn’t have a radio. What you’ll do instead is press the button to take a reading and then the meter will be in standby and wait for a flash to happen. You can just press to take a reading and then press the test button on your flash remote trigger.

When metering in flash mode, you’ll almost always want to set your ISO to the lowest possible value for your camera (100 for most cameras) and your shutter speed to your camera’s sync speed (1/250s for my Nikon camera), so it becomes a no-brainer really.

On the Sekonic L-308S-U, the cordless flash mode is represented by a lightning bolt icon ⚡.

If you’re shooting with flash, but don’t have an easy way to trigger your flashe(s) remotely from where you are when you’re metering, you can use a PC sync cable with one end connected to the light meter and the other end connected in the flash. With that setup, pressing to take a reading will trigger the flash. On the Sekonic L-308S-U, the cordless flash mode is represented by a lightning bolt icon ⚡ and a little “c” next to it.

Tip 1: Tweak Without Having to Re-meter

When you’ve metered once, you can change the values that you started with and the 3rd value will be adjusted automatically. Beats trying to the the math in your head, and saves you from re-metering at the different value unnecessarily.

Tip 2: Adjust Your Flash, Not Your Camera

If you’re shooting with flash, a good rule of thumb is to set your camera at whichever aperture you want to shoot, and then take meter readings and adjust your flash’s output power until your meter reading reflects what your camera is set at. Having your camera set at a specific aperture value and tweaking the flash(es) instead is a good idea because if you change your camera’s aperture setting all your flashes will be affected at once, versus being able to tweak each flash on its own.

So, for example, if your camera is set for an aperture of f/11 but your meter reads at f/8, you’ll want to increase the power output on your flash by a stop so that it then meters at f/11.

Light meters are great and can save you a ton of time instead of the trial and error that’s inherent to shooting without one. They are not artists though, and can only tell you what the proper settings should be for a “correctly” exposed photograph. That doesn’t mean that that’s what you’re after. Maybe you’re trying to create something really dramatic and dark, extra contrasty, or light and airy. That’s why it’s also important that you make the final judgment call in how your want your photo exposed. The light meter will get you there right away most of the time, but other times it’ll just get you in the ballpark and you’ll want to adjust so that the result looks like what you wanted.

Now for some questions and answers:

Can I still shoot without a light meter?

You most certainly can, and many photographers never use a light meter. You’ll just have to do more trial and error to arrive at the proper exposure. With time though, you’ll tend to become pretty familiar with your equipment and able to take pretty good guesses without as much trial and error.

A light meter definitely saves time though, especially when you start tweaking/moving your lights around and wanting to make sure that you’re staying at the same exposure.

Can’t I just use the meter in my camera?

Plus, the light meter in your camera can’t meter the light output coming from your flashes. So with flash photography the meter in the camera becomes pretty useless really.

Should I point the meter at the camera or at the light?

I actually like Mark Wallace’s breakdown in this video and agrees with his opinion that it depends on what you’re trying to prioritize. If you point the meter at the camera, you’ll get a good overall reading for an exposure that’s correct throughout, and if you point it at the light you’ll get a right exposure that’s more targeted at where that light falls. If your goal is a higher contrast image, pointing at the light makes sense, but if you want things more even stevens, then pointing at the camera is the best bet.

💪 Alright, that’s all folks! Hopefully now you have a good gasp of how to use a light meter. ↘

Comparing the technical specs and reviews between the Nikon Z7 and the Canon EOS R camera systems.

Capture One 12 brings a slew of new features and improvements for your RAW photo editing needs. Let's explore some of them in this post short post.